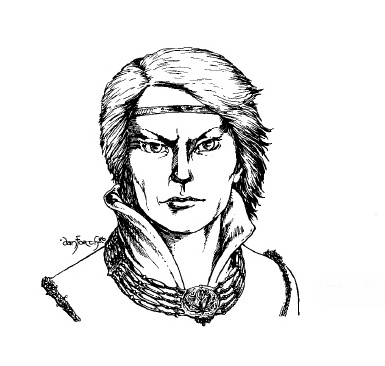 The son of Angrod Iron-handed, Orodreth (S."Mountaineer") stood with Finarfin against Feanor when the Silmarils' creator sought to lead the Noldor out of Aman in pursuit of Morgoth. Orodreth's words were calm and full of wisdom, but availed not in halting the Elves' departure. Finarfin chose to forsake the exodus after the Prophecy of North. All his offspring, including Orodreth, chose to follow Feanor to Middle-earth for their love of the sons of Fingolfin. Orodreth dwelt with Finrod in Beleriand until Nargothrond was complete. Then Finrod Felagund removed to that cavern hold, leaving Orodreth the wardenship of Minas Tirith on Tol Sirion, For nearly four hundred years he held the pass against Morgoth's Orcish raiders. Two years after the Dagor Bragollach, Sauron, Morgoth's most powerful minion, later the Lord of the Rings, was sent against Tol Sirion with a great force of Werewolves and Orcs. His shadow of sorcery fell over the isle, and all those defending the ramparts were struck with fear. Orodreth and his warriors were driven out, and the stronghold became a watchtower for the Black Enemy. Its name was Tol-in-Gaurhoth. Orodreth fled to Nargothrond and dwelt there with his kinsman. When Beren Ercharmion, son of Barahir of Ladros, bade Finrod accompany him on the quest for a Silmaril from Morgoth's crown, Orodreth urged the King to refuse. Yet Finrod held himself bound by the oath he had sworn to Barahir of Ladros after his rescue in battle to aid the Adan's son. He asked Orodreth to serve as steward in his absence. This suited Celegorm the Fair and Curufin who sought to seize the crown of Nargothrond. Their plotting was revealed by Lúthien Tinúviel, who liberated Tol Sirion from Sauron with the help of Huan the Hound. With the arrival of the freed captives came word of Finrod's death. Orodreth was taken by the Elves of Nargothrond as their King, and he banished Celegorm the Fair and Curufin from his realm, Orodreth pursued a policy of secrecy and guarded strength, of stealth and ambush, of wizardry and the hidden arrow. He did not send a host to join the Union of Maedhros, since he refused to aid any son of Fëanor (holding Maedhros' brothers responsible for Finrod's death). Against his wishes, his warlord Gwindor son of Guilin led a small company of Elves in the Nirnaeth Arnoediad. Turin Turambar came to Nargothrond aftet the Fifth Battle of the First Age and urged the King to boldness and open attacks against Morgoth's Orcs. Orodreth built a bridge across the River Narog, permitting his warriors to sally forth from the Doors of Felagund with ease. The Black Enemy's raiders were routed from the lands east to Sirion and west to the Nenning. In response, Morgoth dispatched a great host along with the dragon Glaurung against Nargothrond. Orodreth and Turin led their warriors forth to meet the enemy in open battle. The Orcish forces proved more numerous than report had told, and the dragon's flames scorched all who faced him, save the warlord who was protected by his Dwarvish mask. The Elves were crushed and their King slain. His wife, the reclusive Miredhel, bore him one daughter, Finduilas the Fair and one son, Gil-Galad. Unlike her mother, Finduilas chose to enjoy fully her status as a princess of Nargothrond. Her eldest son Haldir was murdered by Orcs as an adult during Nargothrond's Fall.

Orodreth stood 7'3", possessed a calm and determined demeanor, and boasted the golden hair of his mother.

Retrieved from "https://notionclubarchives.fandom.com/wiki/Orodreth_of_Nargothrond?oldid=129954"
Community content is available under CC-BY-SA unless otherwise noted.