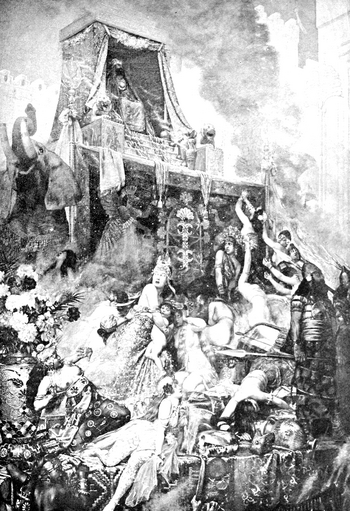 The Mulkhêrhili (Ad."scions of him who arose in might") were a sect or cult of sorcerer-priests who revered Mulkhêr or Alkar as the true creator and one god. The group had originally been created by Sauron himself, to infiltrate the Númenórean colonies and plant seeds of rebellion from within; with his departure to Númenór however the group rose to power in Númenór itself, where Sauron eventually rose to the high advisor of King Ar-Pharazôn and established the great temple of Alkar. After the destruction of Númenor, fractions of the Mulkhêrhili survided among the so-called Black Númenóreans, however these successor-cults often operated under different names and chose to work in secret, not letting too much of their secret inner teachings to be known to outsiders. For this reason they often created other small cults or infiltrated smaller local sects to use them as cover for their true agenda.

Retrieved from "https://notionclubarchives.fandom.com/wiki/Mulkh%C3%AArhili?oldid=145981"
Community content is available under CC-BY-SA unless otherwise noted.