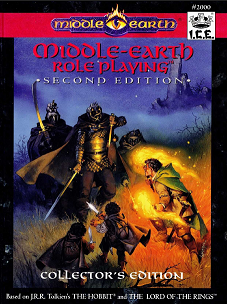 The Middle-earth Role Playing game (MERP) was released by Iron Crown Enterprises (ICE) in 1984. It is a simplfied version of ICE's Rolemaster System. There have been two editions of the rule-book, and many modules and supplements published until Iron Crown lost the license in 1999. It is currently out-of-print.

The Lord of the Rings Adventure Game (LOTRAG) was released as a further simplified version of the MERP rules.

Retrieved from "https://notionclubarchives.fandom.com/wiki/Middle-Earth_Roleplaying?oldid=147666"
Community content is available under CC-BY-SA unless otherwise noted.