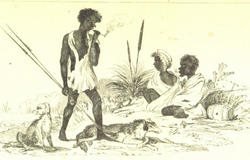 The i-balúkmúl (Kú."Galley-slaves") were a people of eastern Southernesse's great east-continent.Their name implied "Galley slaves" and indeed their ancestors had been rowing-slaves from a fleet of Haradrim or black númenórean galleys which had been raided by the Mizdê-Penni from the crooked mountains in TA 1288.The surprised elves had freed the slaves and allowed them to settle the nearby valleys.The newly Freedmen eventually found indigenious wives and grew to a small local tribe.They preferred to be called the "i-fala" (Kú."Freed-men") but still were known as the "Galley-folk" to most other men of Southernesse.

The i-fala's ancestors had mostly been men of Harad and womenfolk of the old ones, so they represented a mix of both cultures, being mostly a dark skinned, heavy built folk.However they wore clothing more similar to types common to the coasts of western Harad or the Bay of Ormal and usually wore their hair (or beards in case of the males) short and well trimmed.

They were settled and hardy farmers and tamers of beasts. Also,in contrast to the old ones, they did not fear the elves, but quite the opposite, even held up friendly ties towards them, often trading with the, otherwisely so reclusive, immortal folk.The i-fala valued personal freedom and individuality above everything else and yet, had the odd practice of keeping much of their possessions, be it land or beasts, in common ownership.A clan lived and worked together on their land and equally shared the fruits of their work.If strife arose usually a group split off and simply moved to another place, bloody feuds among groups were rare and seen as a severe tragedy for the entire population.

The i-fala revered a great number of spirits or deities, some of them brought from Harad by their slave-ancestors, some adapted from the genius-worshiping old ones.

The i-fala were not a warlike folk.They fought if they had too and were able with axe, staff, bow, blowpipe and knife, but they had no real trained military and more sophisticated armour was rarely found among their warriors.

Largely inspired by: Middle-Earth Down Under: An Antipodean Campaign by Norman Talbot (Department of English, The University of Newcastle, University Drive, Callaghan, Newcastle, NSW 2308, Australia) ©1994 Norman Talbot; first published in Other Hands 4.

Retrieved from "https://notionclubarchives.fandom.com/wiki/I-bal%C3%BAkm%C3%BAl?oldid=143105"
Community content is available under CC-BY-SA unless otherwise noted.